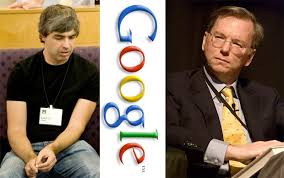 Google co-founder Page to replace Schmidt as CEO Eric Schmidt, a technology veteran brought in as Google Inc’s “adult supervision” a decade ago, is relinquishing the CEO job to Larry Page, one of the prodigies who co-founded the company behind the Internet’s dominant gateway.

The surprise shake-up announced Thursday appears to be driven by Schmidt’s desire to tackle other challenges as much as Page’s personal ambition.

Under the new pecking order effective April 4, Page will reclaim the CEO job that he held for three years before the two venture capitalist firms backing Google in its early days insisted that a more mature leader be brought aboard.

That led to the 2001 hiring of Schmidt, a professorial engineer who was previously chief technology officer at Sun Microsystems Inc. and CEO of Novell Inc., both much bigger than Google at the time. After initially resisting Google’s overtures, Schmidt bonded with Page and Brin to form a brain trust that proceeded to build the Internet’s most powerful company.

“My goal is to run Google at the pace and with the soul and passion of a startup,” Page said in a Thursday interview. “I think I will have time to do that given the way we have split up our responsibilities.”

Schmidt concurred in the same interview, saying Google’s triumvirate decided they needed to find ways for the company to run more crisply.

“I am not as concerned about the titles as I am winning,” Schmidt said. “I am quite certain that this change will result in faster decision making and better value for the shareholders.”

Google’s stockholders have had little to complain about, not that it would have made a major difference because Schmidt, Page and Brin combined own a controlling stake in the company. Google is coming off a year in which its earnings climbed 30 percent to $8.5 billion and, although its stock price remains below its all-time high reached in 2007, it has more than doubled from its lows during the recession.